Last week was an anxious week. The pandemic has infiltrated every aspect of our lives now, both at a personal, local and national level. And there’s more than a dash of politics, to give it some spice. Tropical Storm (now Hurricane) Laura gave us a rough time as it passed by. And we are now back to earlier curfews again – 7 p.m. to 5:00 a.m. – in Kingston & St. Andrew, St. Catherine, Clarendon.

So much has been happening, so fast, and I am actually late posting this. As the title suggests, the news is mostly COVID, politics, and very often both. A few days ago I wrote a piece for Global Voices about campaigning in the time of COVID-19.

Arts and Culture: The National Gallery of Jamaica has announced the postponement of its inaugural Kingston Biennial exhibition, that was slated for December 2020. It will now take place in December 2021. The theme is Pressure, which seems rather appropriate for 2020 – but hopefully that pressure will have eased by 2021.

This week, I also wrote for Global Voices about a British comedy sketch (aired on BBC3 on Sunday evening) called Famalam, which lampooned Jamaicans. The stereotypes portrayed appeared to me offensive, gross, insulting – and dated. I know that one cultural activist in the diaspora, Kim-Marie Spence agrees with me. She wrote on the same topic here.

Caribbean: The 30-year-old Deputy director of administrative services in Suriname’s Ministry of the Interior Vergillio Rebin died yesterday of COVID-19. He was the 59th victim.

Two other countries are reeling under COVID-19 at the moment: The Bahamas and Trinidad & Tobago. Prime Minister Rowley of T&T has gone into precautionary quarantine but has tested negative.

The Prime Minister of Bermuda David Burt has called the election date for October 1, 2020 – very early – because he says he wants to rebuild the economy post-COVID. Elections are not due until 2022.

Climate Change: With Marco churning through the Gulf of Mexico ahead of her, Tropical Storm Laura visited us one evening and decided to stay overnight. By the next morning we were exhausted and sleepless, our neem tree was bent in two and the dogs were in a state of nervous collapse. It was very gusty and the rain was intense. Happily, Laura was in quite a hurry to move on to the Gulf also, via western Cuba, and we were glad she didn’t stick around. My friend Dennis Jones gave his account here (and many of us photographed the sky, which lit up in a rather sickly shade of pink that evening).

However, there was considerable damage to some roads, especially in the Blue Mountains, landslides and flooding. Oddly, two communities currently and previously quarantined due to COVID-19 suffered quite a lot of damage: Eight Miles, Bull Bay in St. Andrew (where the very first case was located, back in March), and Bamboo River in St. Thomas, currently in quarantine, where the river flooded. South Coast Highway works in St. Thomas were also affected.

Crime: Rather unusually, I think, USAID is going to put J$25 million into crime prevention efforts in the parish of Clarendon. These will include training for youth, mentorship, parenting support, and more.

Remember all those people detained during States of Emergency (SOEs)? Well, more than 100 of them were charged with various crimes (13 for murders and shootings), and the remainder released (including deejay Tommy Lee Sparta). All the SOEs were suspended prior to Nomination Day last week.

Health and Productivity: Every day offices – whether government or private sector – are closing because of a COVID-19 positive case. On Thursday, a large uptown branch of National Commercial Bank closed for “deep cleaning and sanitizing.” Other places include several financial institutions, the Tax Office, the Registrar General’s office, the Jamaica Urban Transit Company, and more.The Tax Office expressed its distress: customers were showing up who should be in quarantine. The tax officials are refusing to serve them, sending them home and reporting them to the police. Now they have some positive cases, and so reportedly has the Jamaica Defence Force camp.

Then there are the public figures who have tested positive for COVID-19. They are (in order of celebrity status):

The news of Bolt’s status went round the world in approximately five minutes, leaving the man himself to post a video, apparently having just woken up on Monday morning, saying he had not heard that he was positive yet, and everyone else already knew.

And currently quarantining are two People’s National Party representatives: Member of Parliament Peter Bunting and candidate Krystal Tomlinson, as well as Chairman of the Police Federation Patrae Rowe. The PNP representatives apparently cannot participate in the National Debate this evening, due to their quarantine. I am puzzled that they could not do so from their homes, but it seems everyone has to be “live” from a television studio, without an audience.

New COVID-19 terms that we are now using habitually:

Some controversies have emerged. Bolt was celebrating his 34th birthday with the likes of overseas-based footballers Raheem Sterling (apparently testing negative) and Leon Bailey (when did they arrive in Jamaica?) last Friday; videos circulating showed no COVID-19 protocols being observed. Bolt took his test prior to traveling overseas for an assignment. A couple more well-heeled sports personalities may test positive in the next week or two – who knows?

Another controversy was a video posted on social media by a popular young doctor (who is excellent at explaining COVID-19 and other health issues) Dr. Philip Coombs. He managed to extricate himself from what seemed to be a rather too frank personal assessment of the COVID-19 situation. Never mind; we are all a little nervous, these days.

New Rules: Several new rules were announced by the Prime Minister on August 24 at a post-Cabinet press briefing. Here’s an update: 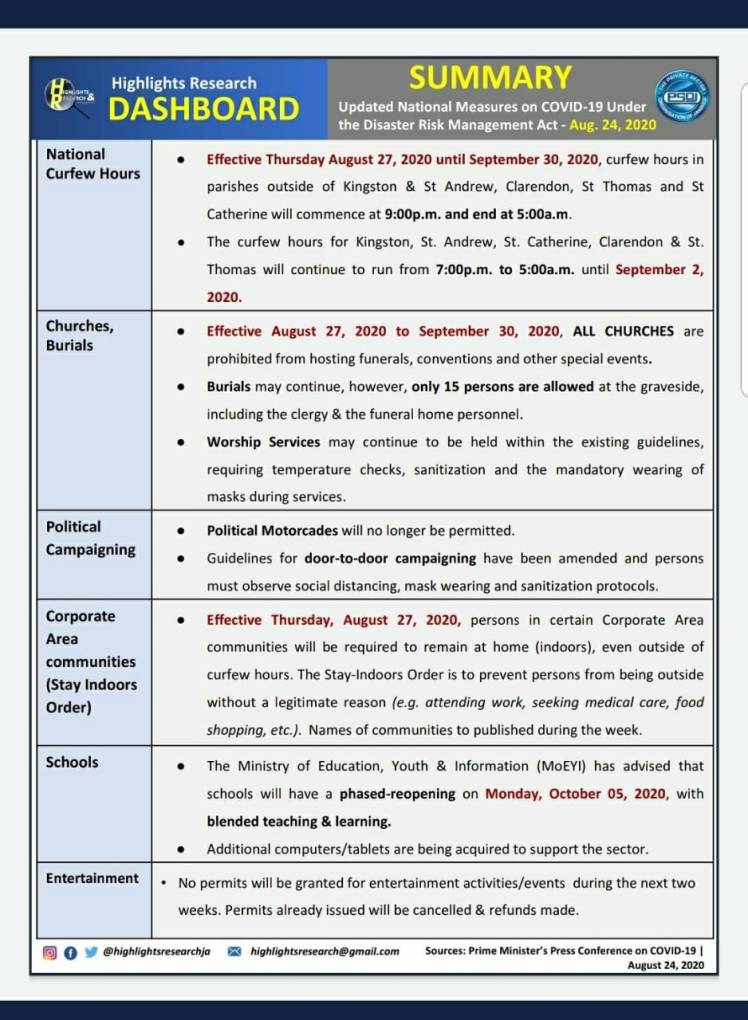 Politics: Could elections be postponed? It seems unlikely to me – even with the escalating COVID-19 numbers – but it’s a possibility and is doable according to the Constitution. However, a postponement could only be for 30 days. We will hear in the next day or two, as the Electoral Commission of Jamaica decides whether to advise the Government to postpone or not.

If you are a follower of political opinion polls – and I believe that in Jamaica they are generally quite accurate – you will find that, this time around and two weeks ahead of the elections, the three major ones that have already been conducted show the incumbent JLP streets ahead of the PNP.  The new Nationwide News Network Blue Dot Poll is pretty much on a par with those conducted by experienced pollsters Don Anderson and Bill Johnson. On Mr. Anderson’s poll, the gap between the parties has widened since February.

The PNP are, perhaps, resigned to holding their traditional seats and perhaps picking up one or two more. The political pundits are on radio night and day, analyzing away, but there are not likely to be many subtle nuances in the campaign, this time around. There’s not really much to say. The only unknown factor is whether anyone will show up on Election Day, in light of COVID-19 fears. The 2016 election, a resounding victory for the JLP, had one of the lowest turnouts ever – could this be lower?

Then there are the usual “tensions” – including, in this case, a murder and alleged arson that may or may not be “politically linked.” A frustrated Pearnel Charles Jr. expressed his pain at the murder of one of his local workers (see below) in a radio interview. When asked on radio whether he had informed the Political Ombudsman (a woman) of his concerns, he was very dismissive and suggested it was pointless. Nevertheless, Donna Parchment Brown dutifully visited Mr. Charles’ constituency and came back talking about “miscommunication and mischaracterisation” over the whole matter. I am not sure we are any the wiser. Again, there were allegations that a fire at May Pen Market was politically motivated. Who knows.

Televised debates: The Jamaica Debates Commission, a private sector effort (which is really, I believe, a “good thing” for our democracy if stultifyingly dull at times) is hosting three debates: Tuesday, August 25 on “social issues” (health, education etc); Thursday, August 27 will be on economic issues; and the two party leaders will debate on Saturday, August 29 – all from 9:00 to 10:30 p.m.

The party manifestoes eventually emerged – the Opposition People’s National Party launched theirs first, and the Jamaica Labour Party, in a flurry of green, had a grand live launch on social media. They are replete with promises; overflowing with goodies. Jobs! Homes! Education! Portmore to become a parish (eh?)! But where is the money going to come from?

Promises, promises… but where’s the money going to come from?

Road safety:  When I hear the words “lost control of the vehicle” I think the person must have been speeding. Maybe this was the case when 46-year-old McNeill Kerr died in Hopewell, Hanover on Monday morning after losing control, crashing into a utility pole.

And seven (!) vehicles were involved in an accident at a stop light in Montego Bay, including a JUTC bus. What on earth happened? There were several injuries.

And a young man who attempted to overtake another car, 20-year-old Michael Brown, crashed in Thompson Pen, Spanish Town and died.

At the recent motorcycle training in Westmoreland, the intrepid head of the Road Safety Unit Kenute Hare warned participants that they could damage their hearing if they continue the practice of removing mufflers on their bikes. In his usual witty manner, Mr. Hare said: “Put your money down to buy hearing aids, and rest assured that the shops do not sell eardrums.”

Kudos! There are lots of kudos to be handed out, but first and foremost I must congratulate Don Dobson, Senior Director of Communications and Public Education at the Broadcasting Commission of Jamaica, on being awarded a Chevening Scholarship in the UK. He is among 14 scholarship awardees.

The British Journalism Awards are to name an award after Barbara Blake Hannah, a cultural icon who became the first black journalist to appear on British television in 1968. This is a wonderful and well-deserved honor. And better late than never!

It is always the “most wanted” who get shot dead by the police. Once they are killed, this usually leads to several murders and other crimes being “cleared up” – despite the most wanted never being tried for these particular crimes and found guilty or not guilty. Mr. Chambers was linked to no less than 15 murders.

My condolences to the families of all those who have died violently. They are people, not statistics.

Finally, a quote from my friend Dr. Anne Bailey, which rather sums up our whole situation (not only in Jamaica). She observed on Twitter:

So I am having a random conversation with someone today where Covid was a part of the discussion and said casually, “because anything could happen…” You know that expression. It is just an expression – and then he said: “Anything IS happening.”