This could turn into a long post, because there is “so much things to say,” as Bob Marley sang. Where to start?

I have been browsing, reading, and writing, for most of the day. There were of course several events for International Women’s Day in Jamaica, including a tribute to Mary Seacole at the Institute of Jamaica this morning. I did not attend any events. But let me start with a couple of social media posts by two women I know. Firstly, Shelly-Ann Weeks posts on Instagram (you can read my interview with Shelly-Ann for Global Voices, here):

I look forward to the day when women have political, financial and social equality. When we can fully hold agency over our bodies and our choices. When we are no longer seen as property, when it’s no longer considered an insult to a man to be compared to us and when our voices are treated with the respect they deserve. It’s #InternationalWomensDay and I want to thank past generations of women who sacrificed so we can be closer to achieving real equality. #EachForEqual #IWD2020 #CelebrateJamaican Women

Secondly, the words of climate change expert Anaitee Mills resonated. I so enjoyed the beautiful combination of hashtags:

They are the ones that #change every day, the ones that #evolve and #transform but #never leave their #essence. It doesn’t matter your color, shape, culture, ideology, etc. Matters that you make our world a better place and that’s enough! Happy day, amazing Women.

In an Instagram post with a beautiful photo of his wife and Member of Parliament Juliet Holness, our Prime Minister noted that women are “the backbone of our society.” I have heard this said so many times before, usually by our men. How is it then, that many Jamaicans (especially our men) seek to break that back, over and over again?

“Neither women nor the Earth is a territory for conquest.” (Photo: Thaly/Global Voices) 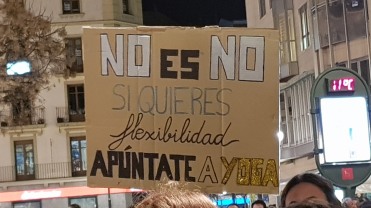 There were demonstrations in many cities for International Women’s Day. Here are photos from France, Spain and Indonesia, courtesy of colleagues at Global Voices. But…while we celebrate and recognize our amazing women, you know what? I don’t think we want to be put on pedestals. We want equality. We want fairness. We want kindness. We want respect.

Perhaps uppermost in my mind, at the moment, is that we want protection.

According to the Gender Equality Observatory for Latin America and the Caribbean (and yes, we are all in the same boat, so no need to split us up) “femicide, feminicide, or aggravated homicide due to gender” is a major concern. Official information for fifteen countries in the region shows that at least 3,529 women were victims of femicide in 2018. That is just one year. This number includes those murdered by their partners or ex-partners. In the Caribbean, St. Lucia had a rate of 4.4 murders per 100,000 women in 2017 and Trinidad & Tobago had 3.4 per 100,000.

It seems that as women begin to play a more active and assertive role in Jamaican society, there is a deeply disturbing undercurrent. Women in the Latin America and Caribbean region are in physical danger – from men. On an everyday level, we see this  in the abusive behavior of men who wipe our windscreens at traffic lights, in the implied threats that often accompany sexual harassment on the street, the power politics in the workplace…and at home, the very real presence of domestic violence. In short, our women are being threatened, injured, and killed at a terrifying rate.

And on February 27, 2020, a 22-year-old visually impaired student at the University of the West Indies (UWI), Jasmine Dean boarded a taxi in Papine, St. Andrew to go to her home in Bull Bay. She spoke to her father on the phone from a taxi at around 10:30 p.m. She has not been seen since. Where is Jasmine? Someone must know. Her family, fellow students and even taxi drivers are in deep distress. Here are some more pictures of her:

Our women – of all ages, those with disabilities, too – and our vulnerable girls, regardless of status – all need protection.

At today’s celebration of Mary Seacole, Principal Director of Culture Joan Archibald in the Ministry of Culture, Gender, Entertainment and Sport stressed that, while the economic gap between men and women appears to be closing, “an alarming level of violence against women” has gathered like a dark cloud. The United Nations and European Union’s “Spotlight” initiative – to be officially launched in Jamaica tomorrow, March 9 – aims to “eliminate all forms of violence against women and girls.”

Women are brave. Physically brave. In the Americas, there are many high-profile names that come to mind: Brazilian LGBT activist, feminist and politician Marielle Franco, who was murdered two years ago; US-born nun Dorothy Stang, who had defended the rights of farmers in the Amazon rainforest, the victim of a 2005 “hit”…and many others who have defended human rights across the region, and continue to do so. Hardly the “weaker sex.”

And there are the thousands of other women, who face up to their attackers, their partners, for the last time, or who are ambushed by former partners who feel that their women still belong to them, like chattels. There have been a number of such cases in Jamaica this year, and many have chosen to label the perpetrators as examples of “toxic masculinity.” Their poison seeps into society. Achievements, success, love, happiness, family are destroyed. What is the antidote?

On International Women’s Day and beyond, I urge Jamaicans to honor, respect and protect our women. All of them. Every one. I salute all those who have stood up to injustice and cruelty. Many of them are no longer with us.