It started off as quite a normal Tuesday. I attended the launch and signing of the contract for a major health program – the Health Systems Strengthening Programme – at the Courtyard Marriott. I will provide more details in my next blog post; suffice it to say that it is the largest health infrastructure program in Jamaica for thirty years and funded by the Inter-American Development Bank (IDB) and the European Union, to the tune of over US$40 million. It was a very well organized and cordial event, delightfully MC’d by Fae Ellington – a consummate professional – and ending with delicious samosas and a good chat. So far, so good.

Then there was an emergency press briefing, back at the Ministry of Health and Wellness. We met up with Minister Christopher Tufton again, as he brought us up to date on a “suspected case” of the coronavirus that originated in China and where there are now cases in 18 countries (to date). Here’s an update from the World Health Organization (WHO), who spoke with Chinese leaders today. The WHO reports: “The two sides agreed that WHO will send international experts to visit China as soon as possible to work with Chinese counterparts on increasing understanding of the outbreak to guide global response efforts.” Well, it’s about time.

Back in Jamaica, news of the suspected case caused a stir earlier in the day at the University Hospital of the West Indies (UHWI); soon after, it caused a stir on social media. So, the Ministry had to call a press briefing. The Hospital’s Medical Chief of Staff, Dr. Carl Bruce, was present, along with the Acting Chief Medical Officer, Dr. Karen Webster Kerr. Dr. Bruce explained that the symptoms of the patient who had returned from China “did not meet the case definition” for the coronavirus. So that was that.

Let the Ministry of Health and Wellness take up the story. Here is Minister Tufton’s statement this morning, subsequent to which he made a full statement in Parliament at 2:00 p.m.

There is no truth to the claim that there is a case of the new Coronavirus at the University Hospital of the West Indies.

Ladies and gentlemen of the press, a statement will later today be made to Parliament. However, to quickly catch you up…

In terms of Jamaica’s preparedness for the Coronavirus, we have had discussions at Cabinet. There, the Pan American Health Organization/World Health Organization (PAHO/WHO) representative and our technical team in the Ministry briefed Cabinet on the status of the country and what is happening internationally.

This morning, we had a meeting with the Minister of Foreign Affairs and the Chinese Ambassador. Based on those discussions, the Government of Jamaica will continue its surveillance protocols, which are in alignment with international health regulations.

Active surveillance will continue at our ports of entry.

A travel advisory is being issued. Persons in China who were planning to travel to the island are being asked to defer those plans.

For those in Jamaica, who had planned on travelling to China, we are asking that they also defer their plans.

For persons in transit to Jamaica, our quarantine protocols will be put in place where persons will either be quarantined in a health facility or at home, depending on the risk assessment done.

A couple of things worried me: it transpired at the briefing that the Ministry’s handheld temperature machine had apparently been stolen from Kingston’s Norman Manley International Airport. This was discovered last week. And this is not good.

Speaking of travel, I am also concerned about our capacity to screen or monitor people arriving at our international airports. We are very dependent on tourism, and we have cruise ship arrivals, too. The thought of all those thousands of visitors arriving daily (including via other countries such as the United States, where there are currently confirmed cases in four states) gives me the sinking feeling that some travelers may slip through the net. The last time we were at the airport in Montego Bay, it struck us as incredibly congested. Especially since the incubation period for the virus is between two and fourteen days – that is, symptoms (“acute onset of fever and respiratory systems”) take a little while to appear.

Well, let us see how things pan out. I haven’t seen the travel advisory from the Ministry of Foreign Affairs yet, but it has apparently been approved.

So, I went on to a meeting at the Institute of Jamaica in downtown Kingston. We were starting a little late (just after 2:00 p.m.) when the odd swaying started, a little like one of those sea currents you feel swirling under your feet, on board a boat. The earthquake seemed to go on for a long time (but it may have been just seconds).

We gripped the edge of the long, solid wooden table. I used to live in Japan, and recall that what you do is drop to the ground, take cover under something strong-ish, hold on to something sturdy-ish, and cover your head with a pillow or something. I decided to duck under the table, to the amusement of my colleagues. Eventually, it stopped.

We discovered afterwards, however, that many workers downtown had not stayed in place, ducked or covered, etc. They had spilled out onto the sidewalk in a panic, putting themselves in danger of being hit by roof tiles, electric wires, light poles etc. The safety advice that had been put out by our Government agencies had clearly not resonated with the general public. 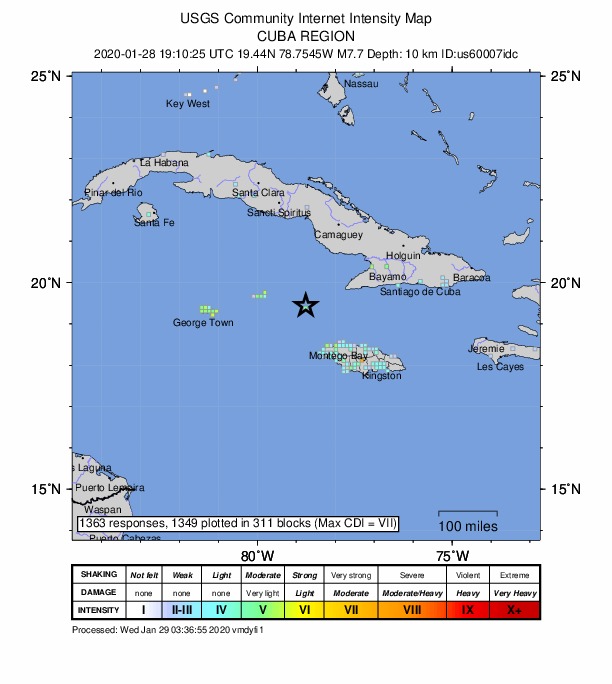 We learned afterwards that the 7.7 earthquake took place 125 kilometers North North West of Lucea in Hanover, western Jamaica. There were more nerves afterwards about a possible small tsunami – and aftershocks. The Cayman Islands came off rather worse than us, as it turned out. But it could have been much worse for all of us, and thankfully no tsunami arrived.

Well, I am now suffering from a touch of nervous exhaustion. I am going to bed.

5 thoughts on “A Nervous Tuesday: That Virus, and an Earthquake”