It’s Earth Day and Easter Monday, April 22. How can we get the message across that our Mother Earth (we don’t use that expression much anymore) is in deep trouble, and that we humans must bear some responsibility? Here are my thoughts, links to click on, and resources.

There is Music: Jamaica’s Voices for Climate Change – singers, deejays, poets – have been working on some powerful lyrics this year, workshopping and going on field trips. They are taking them on the road for live concerts, Read Across Jamaica sessions and tree planting activities at schools and in communities. The next school concert and tree planting event is scheduled for Exchange All Age School, St. Ann on May 10. Voices for Climate Change is a project of Panos Caribbean, supported by the Planning Institute of Jamaica, Climate Change Division and the Pilot Programme for Climate Resilience (PPCR). Videos and more photos coming soon! As singer/mentor Aaron Silk says, “Entertainers are now educators, too.”

And if you want to get goosebumps, here are a couple of really moving environment songs from some time ago (1968 and 1995 respectively): from Marvin Gaye and from Michael Jackson

There is Art:  I would like to see more Jamaican artists focused on nature and climate change. There are many artists who do lovely landscape paintings – green hills and rivers – and photographers who take gorgeous pictures of our flora and fauna – but I would like to see some with a message. Perhaps I am missing them! Meanwhile, others (see the Earth Day art page for many more great examples) – like Ben Von Wong, are creating massive installations out of discarded plastic trash,  for example.

There is Writing: Here’s a wonderful list of many of the best books on the environment and climate change – including classics like Rachel Carson’s “Silent Spring” and Al Gore’s An Inconvenient Truth. There’s also David Suzuki, Jeffrey Sachs and more.

There is Politics: Ah, this is a tricky one. Canadian Prime Minister Justin Trudeau tweeted a lovely picture of himself walking in a forest today. Despite listing his actions to protect Earth – with green checkboxes – he was blasted with many responses about private jets and oil pipelines. There is also the Green New Deal, a bold U.S. congressional resolution to tackle climate change – which so far is getting a mixed reception on all sides. Then there are the promised environmental actions (some fulfilled, some canceled out by other actions) of our own Jamaican Government…An ongoing narrative.

There is Film: An absolute must-watch on Netflix now is Our Planet, narrated by Sir David Attenborough and with the most extraordinary photography I have ever seen. The episodes on our oceans are riveting and worth repeat watching (which I am doing). There are also important messages and a call to action: What can we do? Take a look at the website and do watch, if you can. 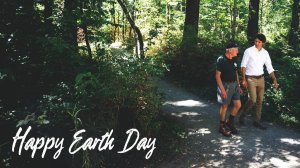 There are Partnerships: Jamaica’s corporate world really needs to get on board, instead of remaining part of the problem. It makes sense in so many ways. The GraceKennedy Foundation has pledged to Clean Kingston Harbour (more on that later); and the Wisynco Group supports environmental projects, including those of Jamaica Environment Trust. Rainforest Seafoods has gone solar in a big way. There are others, but we need more! Check out environmentalleader.com for many more instances of such partnerships – such as the latest between Red Lobster and Ocean Conservancy.

There are Challenges and Competitions: General Accident was inspired by environmentalist Diana McCaulay to run a daily Earth Day Challenge on social media, with many great ideas on what to do (see below).

There are Lectures:  Yes, we can talk some more. And more, and more. We’re good at that.

There is Education: Let me mention the Natural History Museum of Jamaica’s Earth Day celebration, to take place on April 30 at the Institute of Jamaica Auditorium and focusing on the critical topic: Protect Our Species. Schools Environment Programme was founded by JET in 1997 and scaled down due to reduced funding. It once delivered to 350 schools. It needs more support as it has been an unqualified success over the years!

Importantly, the original Earth Day message in 1970 was all about taking action. I am compiling a list of actions that we here in Jamaica can take to help the Earth and fight climate change. I will share that sometime this week, so stay tuned! Meanwhile, what did you do for the Eart today?

Starting with Sir David Attenborough himself, via the World Economic Forum: 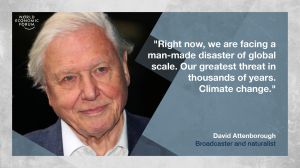 Whatever you do to mark today, don’t wait until next year’s Earth Day to do something good for the earth. Small acts multiplied by millions of people globally will make a big difference in the world. Make everyday your Earth Day, because everyday is🌍day. – Elizabeth Wanjiru Wathuti, Kenyan environmental activist and educator and founder of Green Generation Initiative for young people. She also won a Wangari Maathai Scholarship.

When we look back at this moment in a generation’s time, the real criminals won’t be seen as those blockading bridges – it will be those who understood the science of climate change, yet consistently blocked action to prevent its worst effects. – Caroline Lucas, British MP.

What is the point of learning facts when the most important facts given by the finest scientists are ignored by our politicians? – Greta Thunberg, Student Activist

As we restructure our economy and society away from a high‐carbon economy and toward a more sustainable one, we should seize this opportunity to create the society that benefits all of us, as well as the planet. – Joseph Stiglitz, Nobel Prize Winner.

I don’t really need people, but people need me. Yes, your future depends on me. When I thrive, you thrive. When I falter, you falter… or worse. Your actions will determine your fate, not mine. – Nature is Speaking, a video shared by Conservation International and narrated by actress Julia Roberts.

Earth provides enough to satisfy every man’s needs, but not every man’s greed. – Mahatma Gandhi.

We need the tonic of wildness…At the same time that we are earnest to explore and learn all things, we require that all things be mysterious and unexplorable, that land and sea be indefinitely wild, unsurveyed and unfathomed by us because unfathomable. We can never have enough of nature. – Henry David Thoreau

When the last tree is cut and the last fish killed, the last river poisoned, then you will see that you can’t eat money.
― John May, The Greenpeace Story

We’re in a giant car heading towards a brick wall and everyone’s arguing over where they’re going to sit. – David Suzuki

There comes a time when humanity is called to shift to a new level of consciousness . . . that time is now. – Wangari Maathai, the first African woman to win the Nobel Peace Prize for her environmental activism.

Because, underneath all of this is the real truth we have been avoiding: climate change isn’t an “issue” to add to the list of things to worry about, next to health care and taxes. It is a civilizational wake-up call. A powerful message—spoken in the language of fires, floods, droughts, and extinctions—telling us that we need an entirely new economic model and a new way of sharing this planet. Telling us that we need to evolve.  – Naomi Klein

Nature shrinks as capital grows. The growth of the market cannot solve the very crisis it creates. – Vandana Shiva, Soil Not Oil: Environmental Justice in an Age of Climate Crisis

And the thing is that, everything is interconnected…You think perhaps we’ve lost wisdom? – Dr. Jane Goodall

Oh mercy, mercy me
Oh things ain’t what they used to be
What about this overcrowded land
How much more abuse from man can she stand?  – Marvin Gaye, Mercy Mercy Me (The Ecology)

I used to dream
I used to glance beyond the stars
Now I don’t know where we are
Although I know we’ve drifted far – Michael Jackson, Earth Song

News and views from the other Russians