I have read two books recently that reflect on the complex relationship between the Caribbean and what we like to call our “big, powerful neighbor to the North.” They are both written by Americans, but that is where the similarities end. This book is published by Ian Randle Publishers and is written by Debbie Jacob, whose book Wishing for Wings I also reviewed in this blog. Here are my thoughts…

Influence is a two-way street.

So writes Debbie Jacob, and of course, she is right. For years, we have been swamped with treatises, essays, novels and historical pieces about the smothering influence of the United States on our region. The U.S. is often depicted as a kind of giant monolith looming over our small, vulnerable island; or a puppet master, tweaking the strings. “Jump!” cries the giant. “How high?” we little Caribbean people cry…

Ms. Jacob’s approach is a refreshing one. An Ohio-born librarian and educator by profession, living in Trinidad, she has an unusual perspective. She delves into her resource material (as librarians often do) and pulls out intriguing historical nuggets and quirky little facts. There is a minor surprise – at least, for me – on every page. Ms. Jacob turns the narrative around and examines how Caribbean people have played a part in U.S. economic and cultural development – quite often, throwing a proverbial spanner in the works. The chapters run in chronological order; the book begins in the Dutch colony of New Amsterdam (which became New York) in the mid-seventeenth century, ending with the story of a Kingston-born NFL player in 2015.

This book is all about people, not necessarily great political movements, although Garveyism and the Black Panthers are included. It’s an eccentric and diverse cast of characters. There is the privateer/pirate Jean Lafitte, who with his brother Pierre stirred up considerable trouble in Haiti and then in New Orleans in the late eighteenth century. A flamboyant Errol Flynn character, Jean was buried at sea in the Gulf of Honduras. There is the fascinating story of Denmark Vesey, a St. Thomas-born slave who traveled with his owner from Haiti, bought his freedom in Charleston, South Carolina and in 1821 “organized the most elaborate and well-planned slave insurrection in the history of the United States,” according to his biographer. And there is much more.

These Caribbean people were opportunists; they were searching. Many moved around the islands quite regularly (and not necessarily of their own free will) in the early days. Later, they were immigrants, brought to America by their parents in search of a “better life.” One of these was the young Sidney Poitier, born in poverty on Cat Island in the Bahamas, who later went on to break barriers as a black man in Hollywood. The marvelous Shirley Chisholm, an influential figure in U.S. politics and daughter of a Garveyite, was Brooklyn-born but spent her childhood on her grandmother’s farm in Barbados.

There are some famous figures among the more obscure ones. Alexander Hamilton was born on the tiny island of Nevis. A great writer and political thinker, a Founding Father of the United States, he threw his life away, unable to resist a challenge to fight a duel. The chapter on Toussaint L’Ouverture reveals the complexities of a hero, who in the end suffered for “the one quality that defined his life: fairness.” Marcus Garvey and Bob Marley are two Jamaicans who could not be left out, and their stature in the Caribbean, the U.S. and globally has been well documented (I am a little biased, but I do wish there were more Jamaicans in this book!) There are many details in this book, however, that I seized on. For example, I did not know that Garvey’s father was a cruel and vindictive parent.

There are many gaps in these stories, partly because the close details of these Caribbean people’s lives are not always well documented. Also, the format of the book is compact; each chapter runs to just seven or eight pages. This book invites us to explore further into these people’s lives. It gives you a taste of the period, quickly setting the scene. Then the Caribbean actor enters and is described with deft strokes in a few pages. Despite its episodic nature and “history in a nutshell” approach, the author very cleverly inserts a sentence or two that helps us understand why this actor played a key role, at that moment in time.

In her introduction, Ms. Jacob seems to compare the Caribbean to the small town of her birth, once thriving, which she says now has a “lost sense of pride.” That does not work for the Caribbean; I don’t believe it ever lost its pride. And I am not sure that one can be sentimental about the past. Yes, Caribbean history has produced extraordinary stories of daring, heroism and creativity. It is also filled with “colorful characters.” However, as I think Ms. Jacob realizes it has been mostly been a grim struggle for survival and some kind of dignity. With reasons for great pride, despite everything.

Like so many Americans, Ms. Jacob is the descendant of immigrants and an immigrant herself. She recognizes the injustice of racism in several stories, such as that of Martiniquan woman film director Euzhan Palcy, who directed the apartheid-era film A Dry White Season; and in her account of the galvanizing influence of Trinidadian immigrant Stokely Carmichael on the civil rights movement. Like many of us living in this hemisphere, the author is part of what Jamaicans might call the“mix up, mix up” of migration and movement across the hemisphere and beyond. This gives the book an interesting flavor and a more fluid approach. Yes, this book flows very nicely; it’s a “page-turner.”

“I hope Making Waves proves that small places and small islands can have a grand history that should never be forgotten,” writes Ms. Jacob in her Foreword.

Well, I am not sure about “grand.” Perhaps after all, though, small can sometimes be beautiful. 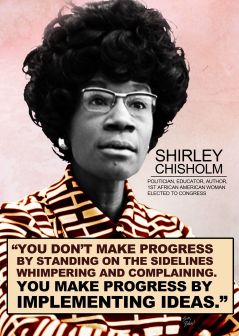 The indomitable Shirley Chisholm, the first African American woman elected to Congress, grew up on her Barbadian grandmother’s farm. 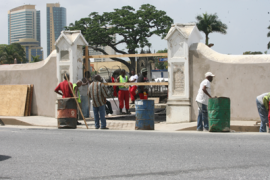 The crew of a United States Naval Ship took part in a ceremony to rededicate the Perry Gate on Lapeyrouse Cemetery in Port-of-Spain, Trinidad, here being refurbished. Trinidadian and U.S. officials jointly hosted a memorial in honor of US naval hero Oliver Hazard Perry (1785 – 1819) for whom the gateway was named. (Photo: Dion Roach/Trinidad Guardian) 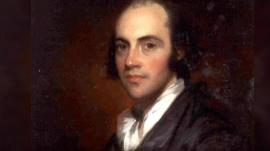 Founding Father Alexander Hamilton, born in Nevis, was a bit of a rock star in his day – and now the star of an award-winning Broadway musical.

Stokely Carmichael coined the phrase “Black Power” during a speech in Mississippi in June 1966. 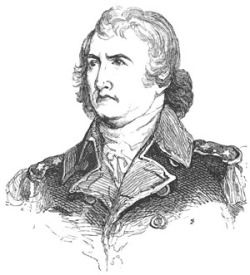 Sir John Colleton and his son James were Barbadian landowners, who established a settlement in South Carolina in 1670 named Charles Towne. One historian writes: “The Deep South was founded by Barbados slave lords as a West Indies-style slave society, a system so cruel and despotic that it shocked even its 17th century English contemporaries.”