World Press Freedom Day, May 3, never really strikes me as a “celebration.” In fact, every year it appears less and less so.

Keeping Power in Check: Media, Justice and the Rule of Law is this year’s UNESCO theme. It seems appropriate.

The catalogue of persecution, oppression, harassment, murder and imprisonment does not cover the past year. They are mostly very recent examples in the Americas, and they are only the tip of the iceberg; not intended to be a comprehensive list, I must add.

If you are interested in exploring freedom of expression, freedom of the press, digital activism and human rights issues in general, you need look no further than Global Voices – a community I am proud to be a part of. In particular, take a look at the Advox section to read the latest stories on free speech.

By the way, the Inter American Press Association has an excellent website. In the past year, it notes, at least 23 journalists have been murdered in Brazil, El Salvador, Ecuador, Guatemala, Honduras, Nicaragua and Mexico, who were practicing their profession on digital media, in newspapers, on television and radio.

In Latin America, Costa Rica came out on top at #10 in the 2018 World Press Freedom Index, while Cuba stayed at the bottom at #172. Unsurprisingly, Venezuela slipped some more, to #143. Despite its rather sinister President and his policies, Suriname was the second Caribbean country after Jamaica at #21. Yes, after Jamaica!

Yes. The one shining light – brighter than an LED street light – in all this gloom was Jamaica, which has risen from #8 to #6 (read more at the link) on the 2018 World Press Freedom Index – just behind five European countries that are permanent fixtures in the Top Ten of Everything. Well, you might be astonished, but when you read about other countries – and not only in the developing world – you realise we are lucky. Darn lucky!

However, let us not take this for granted. Let us cherish this freedom, for which I for one am extremely grateful.

I salute all these brave men and women, doing their job. If one reads these accounts, one must be aware that many of them are, or were, reporting on corruption, usually involving politicians.

Brazil: Radio talk show host Hamilton Alves was driving home from work in Jaru, Rondônia State, on April 20, when two men on a motorbike pulled up alongside his car and fired several shots. He survived – unlike another journalist in the same region, Ueliton Bayer Brizon, who was shot and killed in January. Alves, who often discusses corruption issues on his programme, says:

“Nothing has changed, it just gives me more energy to work. I am a guy who is not afraid of speaking the truth…”

41 journalists have been killed in Brazil since 1992 according to the Committee to Protect Journalists (CPJ). 27 of them were murdered with impunity.

Colombia: Matador is the pen name of Julio César González, a well-known cartoonist who lampoons politicians in general, and former Colombian president Álvaro Uribe, in particular. Now a tweet threatening to kill him has forced him to withdraw from social media and to stop posting his cartoons online – which is about half of his output. The other half is in the El Tiempo newspaper. In an interview with CPJ Matador says:

I feel like I have a pistol pointed at me when I draw.

Dominican Republic: Alicia Ortega, an investigative reporter with the national news channel Notices SIN, has been receiving threats to her life from inmates in the La Victoria prison. Her weekly show El Informe has been reporting on the trial of a man in the prison, who is accused of ordering the murder of another journalist, José Agustín Silvestre de los Santos, back in 2011. The Dominican Government is investigating the threats.

Ecuador: President Lenín Moreno confirmed on April 13 that two journalists, Javier Ortega and Paúl Rivas, and their driver, Efraín Segarra, who had been kidnapped by a group of cocaine traffickers a few weeks earlier, were found dead on the Colombian border. The Colombian and Ecuadoran authorities are being urged to thoroughly investigate the murders, after confusing announcements were made. It’s murky.

Nicaragua: Ángel Eduardo Gahona was reporting on Facebook Live from the Mayor’s office in Bluefields during anti-Government protests on April 21, when he was shot dead. Local television stations had been prevented from covering the protests live.

United States: What a mess the American press landscape is in, amidst the chaos of “fake news” and Trumpism. Journalistseem to stumbling around in a daze, trying to focus, like survivors at the scene of a bomb. Just as they find their feet, someone lobs another hand grenade in, and everything falls to pieces again. The U.S. fell to #45 in this year’s World Press Freedom Index.

At the White House Correspondents’ Dinner, Michelle Wolf fired some more shots, and some of them rang true, for me:

“You guys are obsessed with Trump. Did you use to date him? Because you pretend like you hate him, but I think you love him. I think what no one in this room wants to admit is that Trump has helped all of you…He’s helped you sell your papers and your books and your TV. You helped create this monster, and now you’re profiting off of him.”

Meanwhile, there is the Facebook saga, and the efforts of a company named Sinclair to create a gaggle of right-wing broadcast media – allegedly facilitated by You Know Who.

Meanwhile, elsewhere in the world…

Reporters Without Borders (RSF) has a Predators Gallery on its website, of political leaders who oppress the media. These include – among others – the Houthis in Yemen; Paul Kagame in Rwanda; Salman bin Abdelaziz Al Saud; Bashar Al-Assad of Syria; Ilham Aliyev in Azerbaijan; Joseph Kabila in the Democratic Republic of Congo; and – well, hello there – our dear friends Vladimir Putin and Xi Jinping. Well, at least Mugabe and Zuma have departed…so Africa can breathe, a little.

Speaking of Africa, though, new elections have apparently not created a healthier media environment in Liberia, where a  young videographer was murdered recently. The new President, George Weah, recently verbally abused a journalist at a press conference. “The situation is fear among the media…We insist that [the government] bring the perpetrators to justice,” said Charles Cuffey, president of the Press Union of Liberia.

And horror of horrors, at least nine journalists were killed recently as they ran towards the site of a bomb in Kabul, Afghanistan, including AFP’s chief photographer in the city. A second bomb was triggered, causing their deaths and those of many others. Another journalist was murdered on the same day in Kabul.

Hostility towards the media, openly encouraged by political leaders, and the efforts of authoritarian regimes to export their vision of journalism pose a threat to democracies.

Europe has slipped somewhat in the rankings, as it leans towards more right-wing regimes. The Columbia Journalism Review, for example, notes that after Hungary’s far-right governing party won substantially in last month’s elections, Prime Minister Viktor Orbán feels even more empowered to continue suppressing freedom of the press. This has been fuelled by extreme and anti-semitic attacks on George Soros as well as anti-immigration rhetoric. Media that opposes this is being shut down.

The Committee to Protect Journalists launched its #FreeThePress campaign earlier this year, focusing on five journalists in prison in Egypt, Turkey, the Democratic Republic of Congo, Kyrgyzstan and China. CPJ has documented a record 262 journalists behind bars globally in its most recent prison census. The number could well be higher.

Here is a reminder from the Director-General of UNESCO Audrey Azoulay:

Any State under the rule of law that respects individual freedoms, and particularly the freedoms of opinion, conscience and expression, relies on a free, independent press that is safe from censorship or coercion. 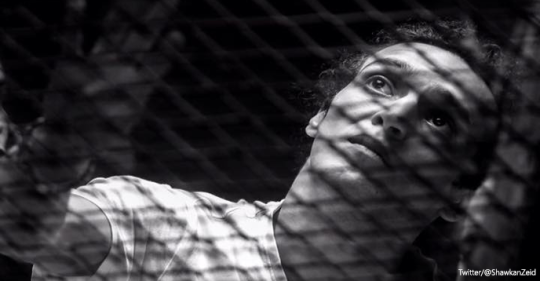 Shawkan, an Egyptian photojournalist, has been in jail since 14 August 2013 when he was arrested while covering a demonstration at Rabaa Al-Adawiya Square in Cairo. In early 2017, the prosecutor in his case reportedly called for the death penalty.

A member of the Predators Gallery: Abdel Fattah Al-Sisi, President of Egypt. Egyptian photojournalist Mahmoud Abu Zeid, known as Shawkan, has been selected by an independent international jury of media professionals as the laureate of the 2018 UNESCO/Guillermo Cano Press Freedom Prize. 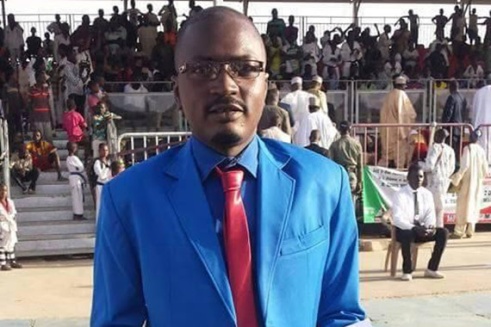 Broadcast journalist Baba Alpha is being harassed by authorities in Niger. He was accused of using false identity documents in retaliation for his reporting. (Mohamed Alpha) 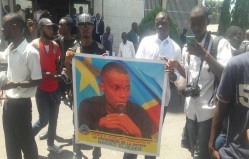 This photo taken in 2013 shows Agence France-Presse (AFP) photographer Shah Marai sitting in a helicopter with a member of the International Security Assistance Force (ISAF) while on assignment in Afghanistan. Agence France-Presse’s chief photographer in Kabul, Shah Marai, was killed April 30, AFP has confirmed, in a secondary explosion targeting a group of journalists who had rushed to the scene of a suicide blast in the Afghan capital. Marai joined AFP as a driver in 1996, the year the Taliban seized power, and began taking pictures on the side, covering stories including the US invasion in 2001. / AFP PHOTO / Ben Sheppard 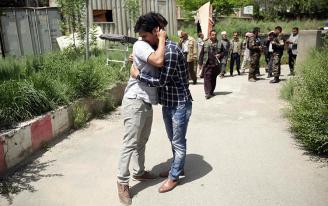 Journalists mourn for their colleagues, who have been killed in the second bombing, in Kabul, Afghanistan, Monday, April 30, 2018. A coordinated double suicide bombing by the Islamic State group hit central Kabul on Monday morning, killing at least 25 people, including eight journalists, officials said. (AP Photo/Massoud Hossaini) 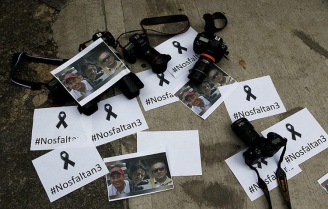 Colombian photographers leave the cameras on the floor in front of the Ecuadorean embassy to protest against the murder of journalist Javier Ortega, photographer Paul Rivas and their driver Efrain Segarra in Bogota, Colombia April 16, 2018. Picture taken April 16, 2018. REUTERS/Jaime Saldarriaga – RC144313D6B0

“He was a journalist, not a criminal”: a memorial to Angel Gahona of Nicaragua, who was shot and killed on April 21. (Photo: Noticiero El Meridiano/Facebook)

6 thoughts on “World Press Freedom Day: No Cause for Celebration”