When the head of the UN Environment Programme Erik Solheim visited Jamaica in December, 2016 he pointed to three priorities for the Caribbean: Pollution, Oceans and Ecosystem Preservation.

When I asked him what he considered the most serious form of pollution, the unhesitating response was: “Air pollution.”

There are several sources of air pollution in Jamaica, depending on where you live. Rural residents are by no means immune; as elsewhere in the world, air pollution is not just a “city problem.” Traveling to the middle of the island last week, I noticed several fires burning. One huge fire of cut branches by the side of the road, flames leaping high, appeared to be completely untended. We are careless with fire.

There are major obstacles to be clambered over, somehow, if we are to ever deal with this problem adequately. That will take considerable and detailed work – and of course, the will, desire and capability to undertake that work. Most of the things we need to do are related to legislation, regulations, standards and “boring” things like that. The rest of it has to do with public education; trying to “change hearts and minds.” The Nuh Dutty Up Jamaica programme, which addressed solid waste (read: plastic) lost its major funder, the Tourism Enhancement Fund (TEF) earlier this year. (So, garbage on the streets and beaches, and seas clogged with plastic have no impact on the tourism product?) Public education is challenging, often hard to measure and costly.

JET’s focus on Jamaica’s air quality issues has intensified as we implement the Jamaicans for Clean Air and Water (JCAW) project, which began in 2016 and ends later this year. Under the project we conducted a review of the legal and regulatory framework governing air quality standards. Before conducting the review we knew that there were deficiencies in Jamaica’s air quality monitoring and regulation, but it wasn’t until conducting our research that we discovered how badly improvements were needed.
For example, two of the major sources of air pollution in Jamaica – open burning and garbage dumps – are not covered adequately under existing legislation. The existing laws are outdated and/or ineffective. Even where laws exist there is very limited ability for the public to report an air pollution issue and receive a timely response from a government agency.
Air quality monitoring programmes are also insufficient and air quality standards are lacking. Although we gather that there are some developments in the pipeline relating to standards, monitoring and regulation of air pollution, improvements are long overdue. Meanwhile Jamaican communities continue to be adversely affected by poor air quality from a variety of sources including mining, quarrying, other industries, and open burning, which impact not only the health of the environment but also of our citizens.

Air pollution – like many other environmental concerns on the island – gets complicated when it becomes a socio-economic issue. It is well known that people seeking income start fires on dumps, including Riverton, so that they can be called in to out it, and make some money. At a meeting on March 8, Minister Without Portfolio responsible for the environment and climate change, Daryl Vaz said that the area around the Riverton City dump should be declared an “Environmental ZOSO” (Zone of Special Operation). Tyres are being repeatedly, illegally set on fire in various places. For a while, the tyres had been moved to separate locations, but now quite a few are back on the dump. Tyres are being burned to extract the metal inside them, for the scrap metal industry.

However, just as the ZOSOs in St. James and Denham Town are not permanent and not expected to “fix” crime problems permanently without the necessary social interventions, the “environmental ZOSO” idea is really a short term solution – unless it can offer alternative livelihoods to those who live on (and off) the dump. I understand (from our garbage collectors themselves, whom we chat with) that no serious recycling takes place at Riverton. “It is illogical to be discussing air quality in the area and not address the poor management at the Riverton Dump,” says Suzanne Stanley. “No tyres, plastic bottles or scrap metal should be sent to Riverton.” There are fundamental management and regulatory issues here.

Pollution in general does not stay in one place. It is insidious. It creeps into our waterways; it seeps into our soil; and it blows in the air. As a result, not only Riverton itself but several residential communities downwind of the dump are suffering. However, air pollution is not just related to the dump, egregious as that may be (and often very obvious). Air pollution is seen, and also often unseen.

There is the pollution from car exhausts. We still see buses and vans belching out fumes from time to time, but even those fumes we do not see are building up. Are we monitoring levels of pollution from transportation, especially in high traffic areas like Spanish Town Road or Half Way Tree? Are we measuring those poisonous gases and particulates that make us cough, and contribute (considerably) to climate change? Does the Ministry of Transport pay attention to this, the most serious form of air pollution in the United States?

Jamaica’s new Road Traffic Act has no motor vehicle emissions standards. While it does provide for regulations to be established for ‘the emission of gases, smoke and other related substances from vehicular exhaust systems,’ the Act itself does not effectively address the problem. Jamaica’s Motor Vehicle Exhaust Emissions Standards have been in draft for over 20 years. Yes, 20.

Bauxite mining causes air pollution. Bauxite plants create clouds of dust, which settles on nearby homes and of course blows in the wind. Residents have reported increased asthma attacks, lung cancer, allergies, difficulty breathing, sinus irritation and bronchitis. This is no ordinary dust – it is corrosive, and if it stays on a zinc roof for a while, it will eat into it. Think what this can do to your lungs! Bauxite mining is also a high producer of emissions in the island – in particular, sulphur oxides; nitrogen oxide; and, most of all the greenhouse gas, carbon dioxide released through mining. By the way, bauxite mining on the island is set to expand in the next few years.

Quarrying, a common operation around the island, also creates huge amounts of dust. Caribbean Cement Company is planning to double its gypsum quarrying at Halberstadt and to establish a 50-acre quarry at Harbour Head, near to its Rockfort plant (which already has a long-standing and poorly addressed “dust nuisance” problem).

We cannot ignore industrial activity. What will the processing of alumina (planned for the plant in Nain, St. Elizabeth) do for air quality in the area and across the parish? Let us hope that standards are established and rigorously adhered to. Just this week, a new flour mill opened; let us hope it is “state of the art.” Do we know what the power sources will be for these new developments? Will we have more smoking chimneys?

Then there is open burning. This is a habit that Jamaicans just seem unable to kick, and it needs to be much more stringently legislated. We have a tendency to burn garbage (plastic included) to make it go away and keep the place tidy. The burning of sugar cane fields is still a problem, although discouraged. Then there is the “slash and burn” method of clearing land for agriculture – which has often resulted in wildfires, in dry weather. As I said, we are careless.

All these activities contribute to our greenhouse gas emissions, as our Climate Change Division will surely tell you. The sooner we recognise air pollution as a major public health issue, too, the better. I am not sure how closely involved our Health Ministry officials are in the process of monitoring our air quality – but they should be. Those most vulnerable to air pollution – our children, senior citizens, pregnant women – are at great risk. The incidence of asthma and respiratory diseases is rising, and air pollution affects other organs beside your lungs. Just like smoking, it affects your heart.

In the United Kingdom, air pollution is very much on the political agenda. A briefing on the health effects was produced very recently, with the phrase “time to act” cropping up regularly in discussions. In London in particular, it has reached a crisis point. It’s something that can be reduced steadily, or at least controlled. But we must take action, as air pollution is absolutely guaranteed to get worse without any steps being taken.

Perhaps we are waiting until we have no more clean air to breathe. 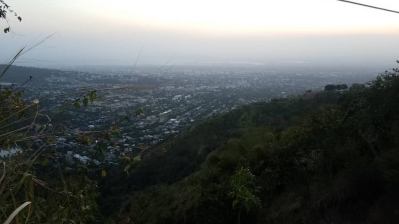 Air pollution over Kingston in the evening. (Photo: JET) 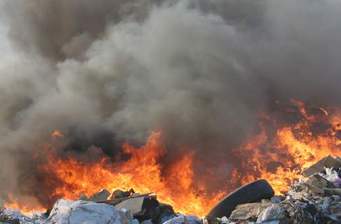 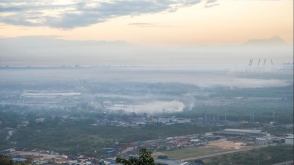 An e-waste dump in Ghana. What are we doing with our e-waste – burning it? 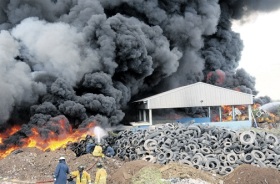 A fire at the Riverton City dump. When is the proposed waste to energy project going to come on stream? (Photo: Jamaica Observer)

An aerial photograph of the Riverton City dump fire in 2015, taken by William Mahfood. (Twitter)

A parent rushes from school with his child, who was overcome by smoke, during a Riverton fire in 2015. (Photo: Norman Grindley/Gleaner)