By now, I am sure we all know what the comment was, and I will not repeat it here. Although somewhat belated, I am happy to see that CARICOM has united around this issue, as have many other organisations and individuals. This response was posted on CARICOM’s website at midday today (Saturday, January 13). It is strongly worded, as well it should be. 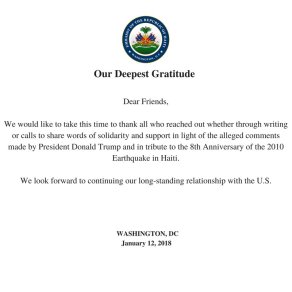 Meanwhile, the Haitian Ambassador to the United States Paul Altidor, in an interview on PBS Newshour yesterday (the 8th anniversary of the earthquake in which 300,000 lives were lost), said he is seeking clarification from the U.S. State Department, after the U.S. Government representative in Haiti was summoned by its Prime Minister. I am not sure whether an explanation has been forthcoming.

Ambassador Altidor himself came to the U.S. (arriving in Boston in midwinter) as a teenage immigrant and attended MIT. He sees this awful development as an opportunity to change the conversation on Haiti and brush away the ignorant stereotypes that the President is seeking to uphold. I really hope that something positive emerges from all this hatefulness, on a sad anniversary for the Haitian people.

The Caribbean Community (CARICOM) is deeply disturbed by reports about the use of derogatory and repulsive language by the President of the United States in respect of our Member State, Haiti, and other developing countries. CARICOM condemns in the strongest terms, the unenlightened views reportedly expressed.

Of additional concern, is this pattern of denigrating Haiti and its citizens in what seems to be a concerted attempt to perpetuate a negative narrative of the country. We are especially saddened that such narrative emerged around the time of the anniversary of the devastating 2010 earthquake which took so many lives of citizens in that country.

The Caribbean Community expresses its full support for the dignified statement of the Government of the Republic of Haiti in reaction to this highly offensive reference. It should be recalled that Haiti is the second democracy in the Western Hemisphere after the United States and that Haitians continue to contribute significantly in many spheres to the global community and particularly to the United States of America.

CARICOM therefore views this insult to the character of the countries named and their citizens as totally unacceptable.

Just me and the thoughts in my head

SEE THE BEAUTY, FEEL THE JOY