Social workers love to use the term “vulnerable populations” to describe those Jamaican citizens, whom we tend to sideline, ignore, dismiss and even forget about altogether. I am not sure I like the word “vulnerable” much, but these Jamaicans are indeed “in harm’s way” because of their position in society – their invisibility. We cannot ignore these Jamaicans. They are not so much helpless as needing more than the usual amount of support and empowerment. 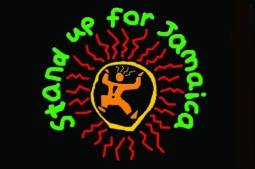 Stand Up for Jamaica (SUFJ) is a human rights organisation that supports and lobbies on behalf of one of these “vulnerable” groups in particular: those who are incarcerated in our prisons. They are shut away. We don’t see them, and “out of sight is out of mind.” But why do Jamaicans largely regard prison inmates as lesser beings? Aren’t all of us equal before the law? Do we know or care about what happens to them once they have served their terms, paid the price and are back “out a road”? Don’t they deserve a chance in life, like anyone else?

I learned a great deal more about the work of SUFJ recently, after attending two events they were involved with (I will write about the second one later). The organisation was founded in 1999 by volunteers for Gruppo Italia 105 Amnesty International in Jamaica and is steered by Maria Carla Gullotta, a tall, dreadlocked Italian woman who has never really lost her Italian accent (just as I have never lost my English one!) but has Jamaica (and Jamaicans) completely in her heart.

SUFJ is now completing a Local Capacity Initiative project focused on HIV/AIDS in Jamaican prisons – a project implemented by CARICOM’s Pan Caribbean Partnership Against HIV/AIDS (PANCAP). One outcome of the project was Barriers Behind Bars, a report that compares global best practices for providing HIV healthcare to LGBT (male) inmates with what happens in Jamaica. The research was funded by the U.S. President’s Emergency Plan for AIDS Relief (PEPFAR). I attended a press conference that discussed some of the implications of the report, and also solutions. Although the subject matter was in many ways disturbing and sad, I came away with a feeling of hope.

It was good to see the UN Development Programme’s Resident Representative Bruno Pouezat there in support, besides representatives from UNICEF and the Ministry of National Security. Executive Director of the National Family Planning Board Dr. Denise Chevannes-Vogel brought more than the usual “greetings.”

She brought us much food for thought. In her usual hard-headed but compassionate way, she presented us with a general picture of HIV/AIDS in Jamaica that may have surprised some in the audience. Who are these “vulnerable” ones – these key populations that health and social workers always focus on? Why… almost all of us, although we would never think so. We think HIV/AIDS happens to those who have misbehaved, in some way. While testing, treatment and procedures have made great strides, there is still, at best, a lack of caring about HIV-positive Jamaicans among the general population. The feeling is that they are paying for their mistake (just like those behind bars). At worst, stigma and discrimination (even, still among health workers) remains an issue. So does poverty; so do cultural myths; so does unemployment; so does lack of education.

Certainly, there is a lack of empathy in society. This is problematic from a human rights perspective. But whether we like it or not, “HIV affects us all,” Dr. Chevannes-Vogel emphasised. It affects heterosexuals who have casual sex and multiple partners; clients of commercial sex workers; partners of commercial sex workers; and yes – the wives, husbands or partners who believe they are fine, even though their spouses are out there, having sex outside the marriage. Dr. Chevannes-Vogel was really pointing out that, although we tend to avoid talking or thinking about these uncomfortable, indeed controversial behavioural trends in our society, that doesn’t mean they are not happening. We would rather not know about them, but these issues are still there. Nineteen per cent of the estimated 32,000 Jamaicans living with HIV are not aware of their status.

This combination of apathy and denial affects the prison population, too; and it is a double affliction for HIV-positive prisoners. For them, as someone observed, it is “a prison within a prison.”

Why is this? Because HIV-positive prisoners are housed separately from the general population. Most are males, aged 19 to 35, and their numbers are thought to be significantly under-reported, due to stigma. By the way, as of the end of 2011, there were 4,000 prison inmates in Jamaica (I am not sure if this includes those in police lock-ups across the country); the vast majority were males (3,800).

Why is the isolation of HIV-positive inmates a serious human rights issue, as well as a health concern? International law holds that prisoners should retain all the rights that are not taken from them by virtue of their incarceration; this obviously includes the right to good physical and mental health while they are in prison. Also, the separation has a serious impact on these prisoners’ lives, one of the most serious being that they are unable to access all the rehabilitation programmes that the general population has – including educational programmes.

In the Tower Street Adult Correctional Facility, that Dickensian building in downtown Kingston often called the General Penitentiary (GP), and the St. Catherine Adult Correctional Facility in Spanish Town, those who identify as LGBT or men who have sex with men (MSM) are housed in a segregated part of the prisons known as “Special Block” (“Special”). Of the 1600 to 1800 inmates at the GP, 150 identify as MSM, while at St. Catherine 65 inmates so identify out of a population of 927. Because of the homophobia, the report notes, 75% of these inmates feared being raped and considered suicide at some point. The HIV transmission rate was 25% among these prisoners, as opposed to 3.3% in the general population.

Let’s “stick a pin” here for a moment. Maria Carla Gullotta spoke of the “basic stupidity” of not supplying condoms in prisons, to prevent further transmission. While HIV-positive and LGBT prisoners are obviously separated for their own safety, the impact is devastating, she added. They are often afraid to disclose their status, and so those who are HIV-positive do not get the vital food supplements they need, for example. However, the stigma and discrimination against LGBT prisoners is even higher than it is against HIV-positive prisoners. This is true both within the prison and when they are released. Even the warders who work in “Special” are targeted and branded.

SUFJ is making efforts to encourage entrepreneurship among this disenfranchised minority.

Sean Casely, the founder of Barefoot Guerilla Films was at the Barriers Behind Bars event. He has been working with a small group of ex-inmates to teach videography, and they have produced a series of “shorts.” The fledgling filmmakers, sitting in one row, smiled rather self-consciously but at the same time were clearly proud of their work. “It’s an instrument in their hand, to allow them to use for themselves,” said Casely – and more importantly, for them to earn a living. So, they will have business cards and will be available for assignments – filming events, parties and so on.

The films were moving, said Executive Director of Caribbean Vulnerable Communities (CVC) Dr. Carolyn Gomes. CVC has supported SUFJ for the past six years; Dr. Gomes commended the group for its “groundbreaking and brave work.”

One film entitled Betrayal (by Michael Bailey and Delroy Heron) was a story without dialogue, about a man, his wife – and a girlfriend. Another video, It’s No Secret (by Norris Livingston and David Lewis) did not show the prisoners’ faces – only their roughened hands and feet clad in sneakers. There was a powerful film by Kerron Henry and Leroy Lindsay on human trafficking. The filmmakers spoke out about their experiences: “In there is hell,” one said simply.

I remember vividly working with Claudette Richardson-Pious of Children First on an HIV/AIDS awareness project in prisons, some years ago now. The prisoners created their own powerful messages, in poetry, music and drama. Claudette is a straight talker. She observed, “We need to get away from the hypocrisy…If we push it under the mat, the mat is going to get up and talk!” As noted above, Jamaicans often don’t face reality. We’d rather not know.

Frustration and anger fuel violence and crime, and the cycle continues. Everyone complains about crime, but they are not making the connections.

However, there are solutions. There are answers, in the SUFJ report. These include (but are not limited to) ensuring that LGBT and MSM prisoners undergo a full health screening on entry into prison and receive the necessary medical care accordingly, as other prisoners do (this seems a “no brainer” to me). Scaling up HIV testing, screening and prevention programmes and looking again at the issue of condoms in prisons is a “must.” These “prisoners within a prison” also need access to legal assistance; staff training at prisons should be human rights-focused, especially relating to LGBT rights. There are a number of laws and policies that need straightening out and that would protect these prisoners – including proper anti-discrimination legislation. And in terms of sentencing, LGBT and MSM offenders who have committed non-violent offences and who do not pose a risk to society should benefit from non-custodial sanctions.

Many of these solutions do not only apply to these particular prisoners. These are sensible, fair and humanitarian recommendations and best practices.

SUFJ’s Mission Statement is simple: “To promote and protect the human dignity of all.”

You can find the full report here.

2 thoughts on “Barriers Behind Bars: Stand Up for Jamaica Highlights the Plight of HIV Positive Inmates”