All my news updates are now so long overdue, but I am trying to get back on track. So here goes with my regular “Top Ten” stories on the environment and climate change from the past two or three weeks… Please click on the embedded links for more information. Most of the stories this week relate to the recently concluded UN Conference on Climate Change in Marrakech, Morocco.

Jamaica and the Caribbean:

Cockpit Country – a decision made, but not announced: According to a recent Gleaner article, the Jamaican Government – after eight long years of dithering around – has finally made a decision on the boundaries of the Cockpit Country. This is the ecologically sensitive area that has had the threat of bauxite mining (and limestone quarrying) hanging over its head for far too long. Prime Minister Andrew Holness told journalist Petre Williams-Raynor in Marrakech recently that the Cabinet has taken some decisions, but that certain technical issues had to be worked out before a public announcement is made. There are several different boundaries suggested; I wonder if the Cockpit Country Stakeholders Group may be disappointed and that some kind of compromise may have been reached. Well. We wait with bated breath.

Special Focus on Climate Change next week: Regional representatives of the UN Intergovernmental Panel on Climate Change (IPCC) will be in Jamaica to participate in activities to mark Climate Change Awareness Week (November 29 to December 3). The week, spearheaded by the Ministry of Economic Growth and Job Creation, will include a one-day media workshop on November 29 and a two-day symposium, November 30 to December 1, at the University of the West Indies Regional Headquarters, Mona.

Jamaica House to go solar: Jamaica has joined the Head of State Solar Coalition (“Turning World Leaders into Green Leaders”) and Jamaica House (the Office of the Prime Minister) will be going solar, the PM has announced. The planned system  will generate 15kW of energy and should save the Government millions of dollars. St. Lucia will be doing likewise.

Climate Change Walk: Environmental Solutions Ltd. is hosting Jamaica’s Climate Change Walk on Saturday, December 3 beginning at 3:00 p.m. in Emancipation Park. The theme is Secure Water For All. To register, go to http://www.jaclimatewalk.com and there are further details on Facebook here. There is also a Schools Poster Competition – details below. Do come and participate! 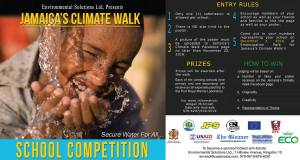 The Rest of the World (and in the case of COP22, Jamaica and the Caribbean too):

Global youth care about the environment: A survey conducted by Masdar among youth aged 18 – 25 years (Generation Z) in 20 developed and developing countries showed 32% considering the environment and climate change the most important issue right now, and 40% saying it will be the biggest challenge of all in ten years’ time. The Masdar Initiative, owned by the Abu Dhabi Government, focuses on clean energy development, sustainable real estate and research in development. The findings of the Masdar Gen Z Global Sustainability Survey were announced in Marrakech, Morocco at the COP22 Meeting on Climate Change.

COP22: Key Outcomes and Initiatives: The 2016 UN Climate Change Conference in Marrakech ended on November 18 with world leaders issuing a Proclamation declaring that the global momentum on climate change was “irreversible” while pledging to carry it forward. There is an overview of the key outcomes and initiatives of COP22 here.

Climate Vulnerable Forum insists on 1.5° and 100% Renewables by 2050: The Climate Vulnerable Forum (CVF) declared its Marrakech Vision on November 18 at COP22. The CVF consists of 43 developing countries at particular risk from climate change (including Barbados, Dominican Republic, Grenada, Haiti and St. Lucia in the Caribbean). These countries vowed to use 100% renewable energy by 2050, and to hold countries to below “if not well below” the 1.5° increase in global temperatures.

Religious leaders and civil society meet on climate change:  An interesting meeting took place just before COP22, in the Sufi holy city of Fez, under the patronage of King Mohamed VI of Morocco. The Fez Climate Conscience Summit  on November 3 brought together religious and spiritual leaders and philosophers, along with civil society with the aim of calling “the spiritual heritage and ethical consciences in their diversity, to develop the foundation for an active and shared ecological awareness, and choose a medium path to establish a universal dialogue.” The first such summit took place in Paris in July, 2015.