I had made a note to write about this issue myself – but instead I am sharing Susan Goffe’s thorough airing of this very painful issue (and how well I remember the haunting, indeed terrifying Braeton Seven incident). This has been a pattern of behavior over decades. It is well known that on quite a few occasions, Jamaican citizens who have been killed or seriously injured by the police have been taken to hospital via the “scenic route” – in other words, the long way round, to ensure they are dead on arrival at the medical facility. I also remember the incident where Mr. Brown was shot directly opposite a hospital – it is very near my home – and taken to another much further away. I hope and expect that the Commissioner of Police will respond!

It is clear from the video that the police think the man they are throwing into the back of their pickup is already dead. Their disregard is graphically captured, as are the distressed wails and shouts from some of the people witnessing what is happening. The police drive off quickly, once the back of the pickup is secured.

The Independent Commission of Investigation (INDECOM) released the following statement by its Commissioner Terrence Williams on May 27, regarding recent incidents in which the police have shown a lack of respect in their treatment of bodies of people allegedly killed by the police: 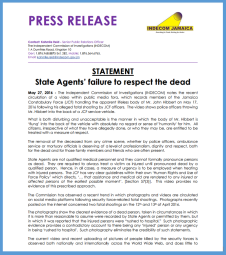 The Independent Commission of Investigations (INDECOM) notes the recent circulation of a video within public media fora, which records members of the Jamaica Constabulary Force (JCF) handling the apparent lifeless body of Mr. John Hibbert on May 17, 2016 following his alleged fatal…

One thought on “Him Done Dead Already: Police Handling of Bodies After Fatal Shootings”