“Motherhood has been downgraded to…a chore,” mused Judith Wedderburn, a member of the 51% Coalition. She was speaking at the launch of Anansesem: Telling Stories and Storytelling African Maternal Pedagogies, by Dr. Adwoa Ntozake Onuora, presented by the Institute of Gender and Development Studies at the University of the West Indies (UWI) on February 19

Some might say that Bredda Anancy, in a common Jamaican spelling, has also been downgraded. His name is also spelled Ananse, or Anansi – or in Ghana, Kweku Ananse; and in the southern United States there is an Aunt Nancy, in the Gullah dialect. In many Jamaican folk stories, the original “spider man” is portrayed as a trickster. He’s a character handed down in West African fable, who crossed the Atlantic with the enslaved Ashanti people. Anansesem means “spider stories” in the Akan language.

But is Anancy really such a bad guy?  Dr. Onuora explores the power of storytelling among mothers of African descent, which helps to anchor the child’s identity and nurtures his/her cultural development in the modern world. Anancy has a bad name; but in her book Dr. Onuora brushes up his image. “Anancy comes from (and lived in) a condition of oppression,” observes Taitu Heron, Gender and Development Specialist, who was guest speaker at the book launch. “He had to find a way to cope with a cruel system” – that of slavery. Anancy was about survival – about using his wits and ingenuity to navigate dangerous waters.

This is an area of academic research that resonates with Dr. Onuora, herself the mother of a lovely girl. Dr. Carolyn Cooper observed, during the discussion at UWI, that the media is to blame. Dr. Onuora agreed that it’s a “one-dimensional narrative.” We need to continue deepening and expanding the image of the mother as not only a nurturer, but as a teacher, who instructs and guides her child. Yes, that is the word “pedagogies” in the title. I find the academic term a little awkward, but understand, of course. Dr. Onuora is an academic. With a subject like this, it is challenging to bridge the gap between the popular and the serious research that has gone into the book.

On the subject of teaching, civil society activist Carol Narcisse made an important point. Jamaica’s educational system, she noted, does not welcome Dr. Onuora’s way of thinking. “Teachers are afraid to talk about identity and African-ness,” Narcisse commented. There were murmurs of agreement, and I joined in the murmurs; I have seen it for myself. The mindset of the average Jamaican educator, guidance counselors included, has always struck me as hidebound – stuck – in this conservative, post-colonial mold. Creative thinking – even asking questions – is not encouraged. Thinking for oneself is not encouraged. Of course there are exceptions; but children are not in general invited to explore (and express, and live) their “roots” in a meaningful way, although the history of slavery is taught over and over again. But that’s just Jamaica’s ugly history. What about the beauty that is Africa? This Black History Month (admittedly an American import, but a useful one) how much attention has been paid to this, apart from the usual old movies rolled out every year on Television Jamaica? Is the Jamaican education system keeping children in “mental slavery”?

By the way, the UWI Bookshop is not interested in selling the book. How strange, considering this is one of their own academics who wrote it. Oh, well – Dr. Onoura sold out of copies at the launch, and a number of us had to put our names on a waiting list. I am still waiting for my copy! Meanwhile, if you are overseas or find it easier, seek out the book on Amazon.com, here: http://www.amazon.com/Anansesem-Telling-Storytelling-Maternal-Pedagogies/dp/1927335191 or you can order direct from the publishers, the Ontario-based Demeter Press: http://demeterpress.org

P.S. Comedian, poet, author and dramatist Owen “Blakka” Ellis is Dr. Onuora’s cousin, and he was the “MC” for the launch event. I should let you know that he will be launching something of his own very shortly. He Said, She Said is a comedy revue focused on the age-old “battle of the sexes.” It sounds like enormous fun. It will open Friday March 4 for a limited run at the Courtleigh Auditorium in New Kingston and will star Karen Harriot, Keniesha Bowes, Kathy Grant, Lakiesha Ellison, Chrystal Cole and Tesfa Edwards. The show also introduces some exciting new actors to the Jamaican stage: Matthew Boyd, Jakeme Clarke and Gemmar McFarlane. Go and grab your tickets now! 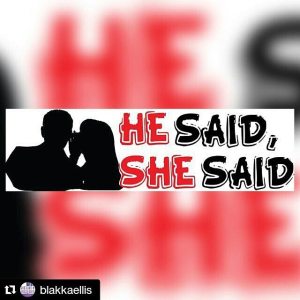 2 thoughts on “Anansesem: Storytelling and the True Purpose of Motherhood”