It is a bright morning with an energetic breeze – the weekend’s rains all blown away. White butterflies from the lignum vitae next door bounce around in the wind. As I enter the S.T.E.P. Centre, the pounding of a Rihanna song reaches my ears. Nika, a blue-haired Dance School student, is getting the children moving. I hear laughter and cries of delight.

The S.T.E.P. Centre (the School for Therapy, Education and Parenting) is a school for children with multiple disabilities, founded by parents in 1992 with just two children to start with (currently 24 are in attendance). The school operated for 17 years in the Church Hall at St. Margaret’s, Liguanea, and moved into its new home on a quiet Kingston cul-de-sac last year. I missed the official opening and had been anxious to visit since the Digicel Foundation handed over the keys to the $28 million school eighteen months ago. This was the Foundation’s largest single-project investment to date, a brand new building.

The building is quite beautiful. Natural light pours in through the many windows. Just a few ceiling fans are needed to cool the spacious central area. It is open and bright and “spick and span” clean. The Centre’s Principal, Hilary Sherlock, says the children are healthier now than when they were in a more enclosed space. Here there is room to breathe. Apart from the central area, where the children gather for their dance session, there is a special classroom for the older children; and a simply amazing room with specialized equipment that helps them explore and develop their senses –  touch, hearing and so on. “It’s a place for them to relax, too,” says Hilary Sherlock, pointing to a huge soft object similar to a bean bag. It looked inviting.

So who are the children? The school takes students from ages two to eighteen years. At the moment, the youngest are three or four years old and one is over eighteen. Ms. Sherlock stresses the invaluable support of the Ministry of Education. “They realize this is a real area of need,” she notes. Some of the younger ones may move on to a School of Hope, Genesis Academy, Liberty Academy, or another school serving children with special needs. Most of the children at the Centre have cerebral palsy; others have other genetic syndromes including epilepsy and other seizure disorders. One very quiet girl with beautiful eyes has Rett Syndrome, a rare disorder that only affects girls. She constantly rubs her hands as she gazes at me.

Cerebral palsy (CP) is one of the most common congenital disorders of children, caused by injury to or the poor development of the brain before, during and immediately after birth. Sometimes it develops in the first few years of the child’s life. It affects the child’s muscle control, how the child moves and balances – either tightening or loosening the muscles. It varies in degree, and can change from day to day. A small percentage of cases may be inherited. There is no cure; but therapy, medication and sometimes physical intervention will help. I meet Guyanese-born Andrea, the therapist, who tells me she has been working with children with CP “since high school.” Medication has side effects and although operations on the limbs may help, she says, they do not address the problem of the connection between the brain and the child’s limbs and spine.

Andrea is very sympathetic to the strain placed on parents of children with CP. In the early years, they are so busy getting all the help they can, and become used to the child’s dependency on them. As the child gets older, she says, “They get burned out.” The child is heavier, harder to manage physically, and more assertive.

Because of this, the Centre’s curriculum is inclusive. An important part of the S.T.E.P. Centre’s work is the training of teachers and parents’ workshops. Each child is assessed and his/her therapy and learning schedule is individually designed. Alongside physical development, the program helps to develop the child’s best possible thinking and communication skills, encouraging them to be as independent as possible. Social interaction is important, too – as I could see when the children were grouped together in a circle, enjoying the dancing and music.

Ms. Sherlock is always researching new ideas and techniques that will help the children. “Thank God for the Internet!” she laughs. She has made helpful contacts on line, and points out her admiration for the work of the UK-based Flo Longhorn, who has produced a range of training manuals on children with special needs. “I would love her to come to Jamaica,” she says.

We step out into the sunny back garden, which is coming back to life after the long drought. Close to the building there are festoons of fever grass (lemongrass); some herbs suffered from the dry summer but will be replanted. “It was just rubble when we moved in,” says Ms. Sherlock. Now, it is starting to bloom, and she is looking for more plants that will attract birds and butterflies. A pomegranate tree is bearing fruit. The Canadian High Commission funded the transformation of the rubble into a garden, including building the surrounding wall – one of which bears a brilliant mural, and the other a colorful “tactile” design. Students from the University of Technology worked on landscaping the garden. The German Embassy also assisted with setting up rainwater harvesting and recycling.

Ms. Sherlock thinks it is most important for the children to go outside; they spend too much time indoors, she believes. 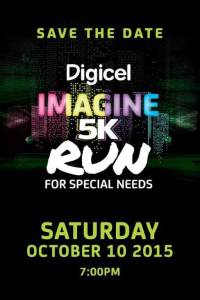 How does the S.T.E.P Centre keep going, financially? The parents pay a fee, but the Centre also receive a grant from the Education Ministry. Together with support from private donors, this means that nearly half of the children are subsidized. Individuals can sponsor a child; the fees are lower than the average preparatory school, Hilary Sherlock tells me. Individual donations are always welcome. The Centre also benefits from the annual Digicel 5K Run/Walk for Special Needs, which will take place this Saturday, October 10 at 7:00 p.m. starting at the Digicel office downtown. The garden also generates some income, through the sale of seedlings and herbs.

Just before I left, Phoenix Printery delivered several large packages, and there was a flutter of excitement. These were the Centre’s beautiful Christmas cards, a great source of income. The designs are beautiful Jamaican artwork donated by the artists, and original art work by the students. They cost just J$100 each and you can order them on the Centre’s website, or drop by and look at the available designs. You can also purchase them at the Canadian Women’s Club of Jamaica’s annual Family Harvest Fair, at the Grosvenor Café on the art gallery compound in Manor Park (Saturday, October 24 from 10:00 am to 4:00 pm).

As I was leaving, Ms. Sherlock showed me a remarkable collage, created by the students and staff. She had been telling me about the Reggio Emilia Approach to early childhood education, developed by a teacher and parents in Italy after World War II – a period when new ideas on education flourished. According to Reggio Emilia’s founders, children have “a hundred languages” through which they can express their ideas; art, drama, music and so on are some of these languages that will help the child’s development. The delicate pattern of tiny feathers, leaves, pieces of bark, and designs created by fly swats (!) dipped in paint was ethereal, exquisite.

These were beautiful and uplifting images to keep in my mind as I left the school. You should visit soon. The children will welcome you.

P.S. As I left the staff were very busy preparing for their first ever celebration of World Cerebral Palsy Day, which is tomorrow (October 7). You can read up much more about this disorder online and from the various messages that will be shared on social media. I plan to share myself. 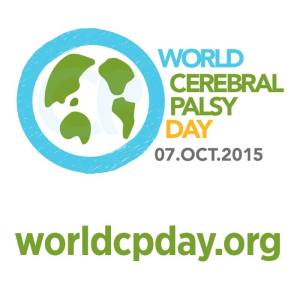 3 thoughts on “Very Special Children: A Visit to the S.T.E.P. Centre”