I was extremely saddened by the news of the death of Gabriel García Márquez, the great Colombian writer. He passed away at home in Mexico City, aged 87, after being hospitalized for a lung infection recently.

Saddened is not a strong enough word, really. His works have always taken me into a world of intricate beauty and enchantment, infused with wisdom. Although I cannot speak Spanish, the English translations have always been enough to transport me to that world. The language alone is entrancing, but Márquez was always the greatest of storytellers. Importantly, he was my personal introduction to Latin American literature. He got me hooked. As you can see from the book reviews posted in this blog, I have remained absorbed and fascinated by the fiction coming from this continent – so close to our islands that I can almost feel its breath. In fact, I have just finished reading “Maya’s Notebook” by Isabel Allende – who has been a California resident for many years but keeps the “Americas” between the pages of her novels. And I do love that phrase, “the Americas.”

Here’s a wonderful quote from the Nobel Laureate’s speech, on receiving the Prize for Literature in 1982. He described Latin America as a “source of insatiable creativity, full of sorrow and beauty, of which this roving and nostalgic Colombian is but one cipher more, singled out by fortune. Poets and beggars, musicians and prophets, warriors and scoundrels, all creatures of that unbridled reality, we have had to ask but little of imagination, for our crucial problem has been a lack of conventional means to render our lives believable.”

So, for all that, thank you, Mr. Márquez.

Here’s a short review I wrote of one of my favorite works. I plan to systematically re-read and review all the others, now.

If you have not yet ventured into García Márquez’ world of vivid beauty and disturbing visions, this may not be the best book to start with. It has the seductive shock value of a really good horror movie (if you enjoy that genre); and the startling chill of a mountain stream on a hot summer’s day. Well, take a deep breath before you start.

From the very first line of the novella, we know that Santiago Nasar is to be murdered. I am not giving away the plot here, as we know this simple fact from the beginning – and in the next few pages, we know who did the terrible deed. So, this is no murder mystery. Where is the mystery then? Why read beyond the first page? The utter strangeness and bewildering puzzle of this tale is not how (this is horrifically described at the end), but why? Why did it still happen when everyone saw it coming, and why didn’t they stop it?

By “they,” I mean the residents of a small town on the Caribbean coast: a town of sea breezes and banana groves, almond trees and balconies around the main square. The narrator returns many years later to try to unravel the story. It begins early one morning (was it cloudy or sunny? Accounts differ) when the well to do, handsome Arab merchant Santiago Nasar rises with a hangover, and dresses in white unstarched linen, hoping to meet a bishop who is due to visit the town. The memories of those he encounters that morning, and those he had met the night before at the wedding festivities, are tinged with fear or scorn, pity or indifference. Moving through the story, pale and innocent, Santiago Nasar almost sleepwalks to his death – a death he does not understand.

The story is disturbing in its simplicity, yet intensely complex. The extraordinary characters are finely drawn with a few vivid strokes, and their conversations are brief; yet there are many things they do not wish to discuss. While the action is close to melodrama – sometimes slowing down, sometimes rushing headlong, like a movie – there is a quiet sense of nothing really changing, underneath. Life goes on.

I am reminded of that bleak little spaghetti Western: Clint Eastwood, cigar clenched between his teeth, rides into a town filled with guilt-ridden, silent inhabitants. But this story has none of the heavy morality of revenge. The murder happens because it simply has to, and that’s the end of it. The scent of it – the sickly scent of Santiago Nasar’s butchered body – hangs over the town.

“Fatality makes us invisible,” a magistrate notes, resignedly, in his brief. No one is punished, no one really mourns. And life goes on.

Dear reader, this tale will haunt you like a brilliant, yet troubling dream. And, even if you want to, you cannot change the ending of dreams.

Author Note: Gabriel García Márquez was born in 1928 in Aracataca, on the Caribbean coast of Colombia, and brought up by his maternal grandparents. His grandfather, a veteran army Colonel of liberal views, and his grandmother and her sisters, with their love of superstition and folklore, were all strong influences. Following his parents’ wishes, he began to study law, but his real passion was reading classical and modern literature and writing; in 1950 he abandoned law and began a journalism career. He was European correspondent for a Bogotá newspaper, which was meanwhile shut down by the Colombian dictatorship. After living in Paris, then moving to Venezuela, he traveled through Eastern Europe in the 1950s, seeking socialist solutions toLatin America’s problems. He reported on revolutionary Cuba, where he befriended Fidel Castro. He finally settled in Mexico City, where he worked on screenplays and published his novellas: “No One Writes to the Colonel” (1961), and “In Evil Hour” (1962). In 1967 his masterpiece “One Hundred Years of Solitude” brought him instant fame and numerous international prizes. “Autumn of the Patriarch” followed in 1975. Still devoted to political and social causes, he sought political asylum in Mexico in 1981. In 1982 he received the Nobel Prize for Literature. “Love in the Time of Cholera” (1986) and “The General in His Labyrinth” (1990) followed. Returning to his journalism roots, he bought a Colombian news magazine and wrote a non-fiction work, “News of a Kidnapping,” on the Colombian narcotics trade in 1996. Since becoming ill with cancer, García Márquez has focused on writing a three-volume memoir.

Chronicle of a Death Foretold was also made, rather unsuccessfully, into a film. Skip the film, READ THE BOOK! 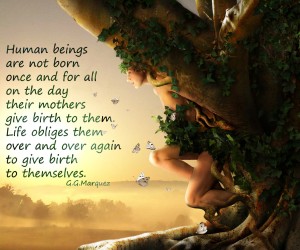 A digital safe space for gender based violence awareness, empowerment and healing